Kairo, born in a working-class family in the 1960’s Ceylon (now Sri Lanka) meets Jay, a boy who seeks adventure and thrill to cover up his hate for his rich, influential and stubborn father and his loathing for his sensitive mother. In the present scenario, Ceylon battles a political crisis, a perfect time for young minds such as Kairo and Jay to explore the streets. As Ceylon’s landscape changes gradually through the story so do Kairo’s perspective of things and what starts as a casual but fascinating friendship grows into an eye-opening and tragic experience.

In this coming of age novel, Gunasekara brings the unstable political scenes to the doorsteps of these two families. While Kairo’s parents spend their days complaining about the religious right and the incompetent left, Jay’s family isn’t bothered by this. They while away their days worrying about which businesses to invest in and the problems associated with such an establishment. Jay’s family is visibly dysfunctional and dangerously carefree whereas Kairo’s father tries to pass his days by betting on horse races between his outbursts while his mother focusses on her job on the radio while worrying about her only son’s future.

Gunesekera discusses the shifting landscape in Ceylon with a precision that shows his familiarity with its history and geography. He highlights the native wildlife through Jay’s passion for fishes and birds while vividly describing the lush countryside through their bicycle rides and other escapades. 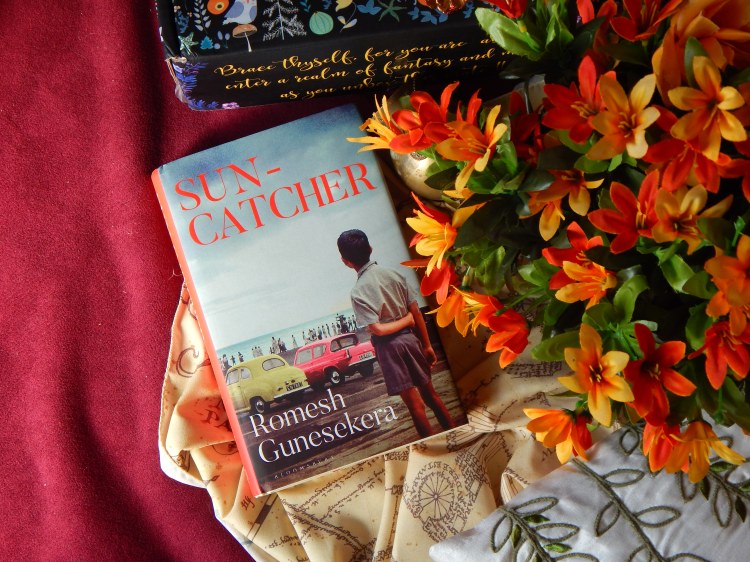 With his fluid narration, it becomes easy to form a bond with these characters, especially on an emotional level. His writing is graceful especially when things hit rock-bottom. It is evocative and alluring to the point that one feels helpless as the events unfold the way they do. Kairo’s maturity comes from a series of unfortunate events, Jay rebels his way through life, Jay’s mother’s unraveling is slow and painful. Similarly, these characts that are a product of Gunesekera’s imaginative mind, leave behind a profound sense of loss after a brief spark of sunshine. The story reminded me of ‘The Kite Runner’, the latter being heavier and a bit more intricate.

Guneshekera makes the dark times in Sri Lanka’s history accessible through these characters and what better way to learn about a country than through a tale that is fragile and feels like a hug full of longing for the lost times.

1964. Ceylon is on the brink of change. But Kairo is at a loose end. School is closed, the government is in disarray, the press is under threat and the religious right are flexing their muscles. Kairo’s hard-working mother blows off steam at her cha-cha-cha classes; his Trotskyite father grumbles over the state of the nation between his secret flutters on horseraces in faraway England. All Kairo wants to do is hide in his room and flick over second-hand westerns and superhero comics, or escape on his bicycle and daydream. Then he meets the magnetic teenage Jay, and his whole world is turned inside out.

A budding naturalist and a born rebel, Jay keeps fish and traps birds for an aviary he is building in the garden of his grand home. The adults in Jay’s life have no say in what he does or where he goes: he holds his beautiful, fragile mother in contempt, and his wealthy father seems fuelled by anger. But his Uncle Elvin, suave and worldly, is his encourager. As Jay guides him from the realm of make believe into one of hunting-guns and fast cars and introduces him to a girl — Niromi — Kairo begins to understand the price of privilege and embarks on a journey of devastating consequence.

Taut and luminous, graceful and wild, Suncatcher is a poignant coming-of-age novel about difficult friendships and sudden awakenings. Mesmerizingly it charts the loss of innocence and our recurring search for love — or consolation — bringing these extraordinary lives into our own.

Thanks to the publisher (Bloomsbury India) for a copy of the book. The opinions are my own.

3 thoughts on “Suncatcher by Romesh Gunesekara”