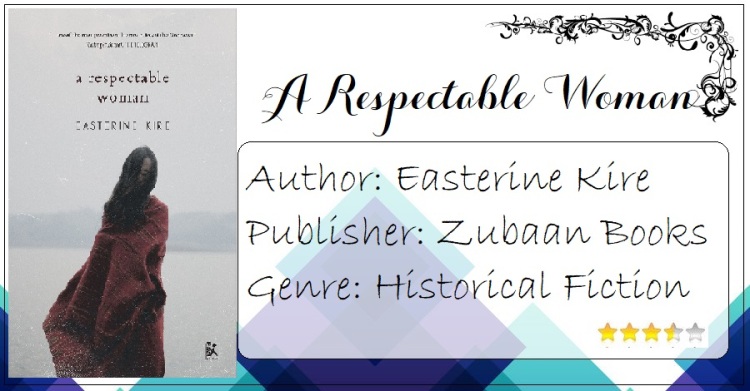 Kire’s latest novel ‘A Respectable Women’ is a daughter’s account of a changing landscape through the stories told by her mother and some bitter personal experiences. Kevinuo is fascinated by stories of her homeland and when her mother finally starts telling her tales from the past, stories of a war-torn Nagaland, she is elated. She finds out more about her ancestors and the burden and responsibilities they carried. The Japanese invasion displaced people and damaged property but most importantly, it brought a radical change to the social structure, creating newer problems that sent a peaceful settlement into chaos.

Kevinuo learns more about the practices of those days such as the mandatory prayers in the Christian convents, losing family members to mysterious diseases and the broad-minded mentality of a generation ‘devastated by war’. But as the years pass Nagaland showed a transition that was extreme and severe. Young men lost themselves to alcohol and abused their women, finally leading to laws preventing the purchase and consumption of alcohol. This was followed by a rapid increase in black market selling and buying of alcohol and hence, more went into it than earlier. The intervention by Christian missionaries helped some but it’s wasn’t easy or immediate. Kevinuo’s personal tryst with such form of violence shapes her thoughts and brings her to a realization that modernization is not always the best thing to happen to mankind, especially women.

In ‘A Respectable Women’, Kire addresses matters that are otherwise considered trivial. Through a vulnerable yet patient protagonist, the author highlights the changes Nagaland saw since the war and how rough its encounter with modernization has been. Kire’s characters are bearers of the narrative in a detached, drifting manner and that is why its easier to read and grasp the points than try to connect with the characters. There aren’t many instances that will stir your emotions and make you feel intensely. But that doesn’t mean that the intensity of the narration is lost. The story is also scorn to the definition of ‘a respectable woman’ the society creates and upgrades or downgrades as per convenience. The story talks of a broken reality, a society still struggling to settle somewhere between the age-old traditions and the modernity slowly seeping into their lives.

The Second World War has just ended. The Japanese have departed. In Nagaland in northeast India—one of the key theaters of the battle—political unrest and tremendous social changes have generated new social problems. For returning soldiers and others dealing with the aftermath of war, alcohol provides some relief and a way of dealing with new realities. The Church, a major presence, joins the battle against alcoholism with its support of the Nagaland Liquor Total Prohibition Act. This mandate, however, only leads to bootlegging and the more insidious problem of domestic violence.

In her new novel, Easterine Kire explores one woman’s journey through these altered realities. In doing so, she also uncovers the underbelly of a society in transition—one that is reluctant to cast off traditional ways even as it entangles itself in the problems of the modern world.