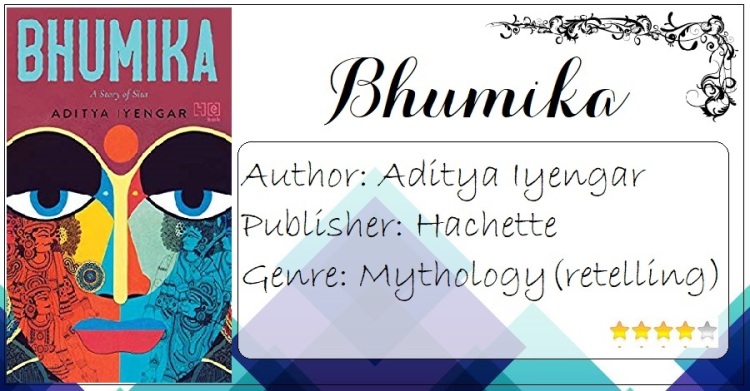 Bhumika, the queen who stood up for her people, removed gender biases in a male-dominated society and stood proud by her choices is a fiction rendition of the popular character ‘Sita’ from the epic ‘Ramayana’.

Sita, in Valmiki’s ashram, is asked to watch a play performed on the eternal love story of Ram-Sita, a tale of love and sacrifices. But Sita’s mind keeps drifting towards one singular thought- What if she didn’t marry Ram? Would her life be different? if so, how different would it be? She is soon given an opportunity to seek the answers she craves, for herself.

Iyengar’s ‘Bhumika’ is a feminist who believes in standing up for herself, taking responsibility for her actions and daring to make choices that are different from the social norms.

Bhumika’s choices are very different from Sita. She refuses to believe that she needs a man to complete her, or that her skill sets should involve only the tasks meant for a princess. Her governance is as shrewd as any King and her decision making radiates confidence and determination. However, she has her fair share of self-doubt and is seen in a dilemma time and again bout her reign and how she is perceived by the world.

Bhumika is flawed and asks all the questions we ask in our day to life about women empowerment and rights. Thorugh multiple questions, Iyengar turns this retelling into a thought proving situation where the readers are forced to question the patriarchy.

“All women ever want is to make their own choices. I was simply enabling them to find it by removing the harness of patriarchy and the rules that worked against them.”

Another striking feature in the portrayal of Ram as someone who sees the world in Black and White. His idea of a perfect society is imposing and unfair on many levels and he would stoop down to violence just to prove that his way should be the only way of life. Ram is depicted as a self-centered king whose kingdom stands for ‘obedience and uniformity’, but the blink faith that people have in him has disastrous consequences.

Iyengar’s voice is singular and powerful, shining through a story that could have existed, a Sita who would inspire generations of women, tackling patriarchy the only way it should be. Sita, the Goddess who has been cast aside time and again, is the narrator and bearer of a story that will resonate with minds, old and young alike.
The brilliance of the story lies in the fact that the author doesn’t discard Sita’s(the original) ideologies as unjust or inappropriate, but merely as a set of choices that she was given and the path she took.

What could Sita have been without Rama?

Spending her last days in a remote ashram, a tired and greying Sita can’t help but wonder, ‘What if…?’
What if she hadn’t married Rama? What if she hadn’t gone into exile with him? What if she hadn’t been kidnapped by Ravana, and waited patiently for Rama to rescue her, ever the dutiful wife? What if she hadn’t returned with him to Ayodhya, only to be later discarded to ‘preserve his honor’?
Until one day Sage Vishwamitra arrives and shows her who she might have been had she not met Rama – Bhumika, a queen who defies convention. Aditya Iyengar’s latest novel is an original tale of two enigmatic women, Sita and Bhumika, secure in their choices but not defined by them. Provocative, layered and moving, this is a narrative that will resonate with generations to come.

One thought on “Book Review: Bhumika by Aditya Iyengar|A Feminist retelling of Sita”