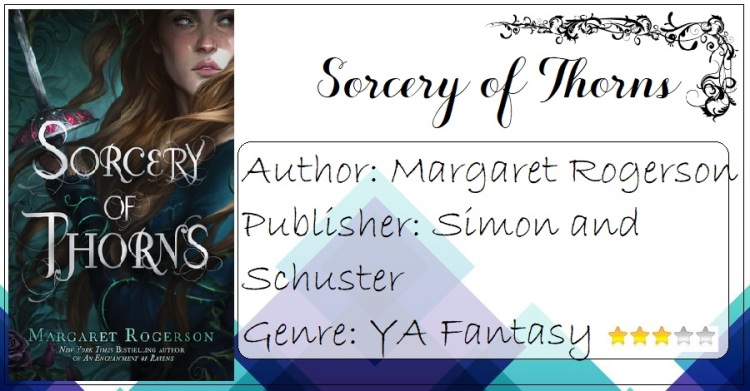 All sorcerers are evil. Elisabeth has known that as long as she has known anything. Raised as a foundling in one of Austermeer’s Great Libraries, Elisabeth has grown up among the tools of sorcery—magical grimoires that whisper on shelves and rattle beneath iron chains. If provoked, they transform into grotesque monsters of ink and leather. She hopes to become a warden, charged with protecting the kingdom from their power.

Then an act of sabotage releases the library’s most dangerous grimoire. Elisabeth’s desperate intervention implicates her in the crime, and she is torn from her home to face justice in the capital. With no one to turn to but her sworn enemy, the sorcerer Nathaniel Thorn, and his mysterious demonic servant, she finds herself entangled in a centuries-old conspiracy. Not only could the Great Libraries go up in flames, but the world along with them.

As her alliance with Nathaniel grows stronger, Elisabeth starts to question everything she’s been taught—about sorcerers, about the libraries she loves, even about herself. For Elisabeth has a power she has never guessed, and a future she could never have imagined.

‘Sorcery of Thorns’- it took me no time to get into the story because the world building is bits and pieces of popular fantasy stories we have read time and again. Elizabeth Scrivener, an orphan who has grown amidst books (which, on their good days are 5-year-old kids with a temper tantrum or on their worse days, can turn into monsters and kill everyone) finds herself in trouble when the Director of the library of Summershall is brutally murdered by a Grimoire.

Seen as the primary suspect, she awaits trial. In the meantime, she meets Nathaniel Thorn, a powerful sorcerer/necromancer who is charming and quirky with a troubled childhood. Together they fight demons and fiends. Their third wheel is Silas, a handsome and brooding demon who is basically Nathaniel’s servant and had impeccable timing. It’s only because of him that the plot moves forward.

Elizabeth is naive and stubborn, Nathaniel is hopelessly in love and Silas’s dream of world domination is on hold. Together they have to defeat a much more powerful sorcerer who is equal parts cunning and delusional.

‘Sorcery of Thorns’ fails to redeem itself time and again. Bejeweled with cheesy dialogues, poorly written battle sequences and a plot that moves forward more by convenience than logic, this is a rough ride. The plot isn’t a total flop because there are scenes where there’s tension (not sexual) and drama and a whole lot of danger.