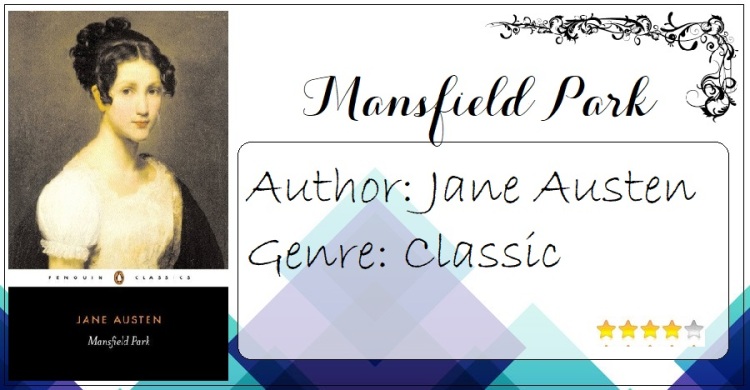 We have all been more or less to blame … every one of us, excepting Fanny’ Taken from the poverty of her parents’ home, Fanny Price is brought up with her rich cousins at Mansfield Park, acutely aware of her humble rank and with only her cousin Edmund as an ally. When Fanny’s uncle is absent in Antigua, Mary Crawford and her brother Henry arrive in the neighborhood, bringing with them London glamour and a reckless taste for flirtation. As her female cousins vie for Henry’s attention, and even Edmund falls for Mary’s dazzling charms, only Fanny remains doubtful about the Crawfords’ influence and finds herself more isolated than ever. A subtle examination of social position and moral integrity, Mansfield Park is one of Jane Austen’s most profound works.

“A large income is the best recipe for happiness I ever heard of.”

Mansfield Park stands out from Austen’s other novels as it is a bitter take on the rich who are quite busy being pompous, forgetting entirely about other people. They also love their moral compass but only apply them to others. These people are hypocrites in their truest sense and Fanny had to take the brunt of it all in Mansfield Park.

Fanny Price has been raised in Mansfield Park, far away from her poor parents. Her aunt wanted to ‘support’ her and hence, she was pushed into the land of the rich and wealthy and forced to be scorned by her cousins and other relatives. She finds solace in Edmund, her cousin and over time she finds herself attracted to him.

Edmund, on the other hand, is compassionate and caring, but also stubborn and a hypocrite.

Fanny loves her morals and she understands what’s right and what’s not (for example- her protest to the play when Sir Thomas is out of town and his safety isn’t guaranteed). She carries herself with a sense of pride in spite of the fact that most people make her feel unloved and not needed at all.

‘Mansfield Park’ can be considered as Austen’s way of dealing with the fact that her own brother was taken away by her wealthier relatives. Fanny enters a world of temptation and flirtation. a world where a lot of factors come into play in order to find a friend and a soul mate. She receives love and attention from Henry, but her heart is inclined towards Edward and her integrity makes her sacrifice all happiness only to long to be with the one she admires.

The persuasion of wealth, name and status is so important for the people in Mansfield Park that they resort to all sorts of unfair means. ‘Mansfield Park’ isn’t a romance, as most of Austen’s works, but the portrayal of what happened in the rich and affluent circles in the Victorian era. It is also an intimate character sketch of people flawed by money and the ones who want to abide by the truth and practice compassion.