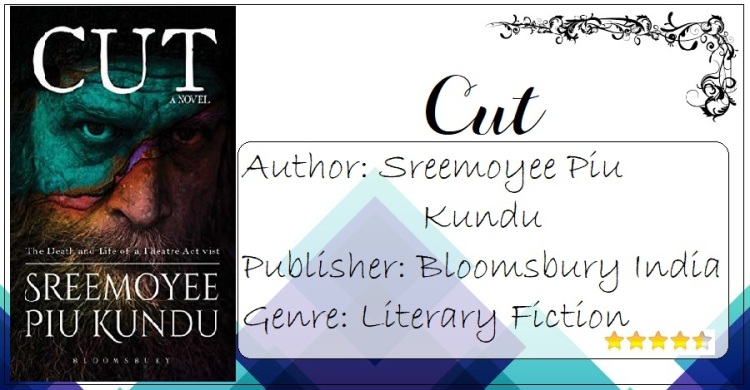 Set in a world of government censure and ruthless stifling of anyone who questions their ways, CUT is a posthumous look at the personal and professional life of a visionary theatre artist.
Would he be considered an ‘urban naxal’ today or remembered as a fearless agent who fought for social change? Did he and those close to him have to pay the price for their voices to be heard?
Told in disparate voices, CUT explores commitment to artistic integrity and art as a platform for social reform against all odds, even when it becomes a question of survival.

A visionary theatre artist and director, Amitabh Kulashestra dies in the Woman’s compartment of a local train. His body is identified hours later and that’s when the question arises- why was a person with Alzheimer’s on the train, without anyone to look after him?

I didn’t know I would like this book so much. The story starts with the protagonist trying to gather his bearings and getting anxious over losing his bag. Amitabh Kulashestra, a legendary icon of this theatre dies such a helpless death, a person who focussed his entire career in bringing the problems of the oppressed out in from of the world.

The story is narrated in multiple POVs. Each character has known Amitabh from the time he started in the theatre world, including his estranged wife Mrs. Sarla Kulashestra.

Through these voices we see the lives Amitabh touched (and destroyed a few), and the misunderstandings and sacrifices along the way. We also get to see the wife, who has lived through the ever-changing moods of a talented and larger than life husband, and a rumor that eventually drove a wedge between them. Maya, the protege who sacrificed her career for her Aiyee, and a lost boy- RK who could never forget his first love.

Amitabh’s life has been a lot of things but he could never express his feeling or thoughts. This trait led to him being branded as a political activist and the subsequent protests, attacks, and court cases.

‘Cut’ is an intense and explicit book. It is very emotional, and the writing made me believe that I somehow knew these characters, that they were a part of my life as much as this fictional world’s. The author also gives us glimpses of the lives of artists and the people associated with them, lives that have gone haywire. In a world where expression of one’s thought/events creates a successful play, these people can’t do much of that in their personal lives. Cut focusses a lot on the emotional aspects of the people and I wanted a bit more focus on the social reform aspect of it and the subsequent opposition faced by the protagonist.

I have rewritten and edited this review so many times and I still find it flawed to the very core. This is a book that should be read, in order to grasp its essence. And hence, anyone interested in reading about the intricacies and unfairness of life needs to give this book a go.

2 thoughts on “Book Review: Cut-The Death and Life of a Theatre Activist by Sreemoyee Piu Kundu”