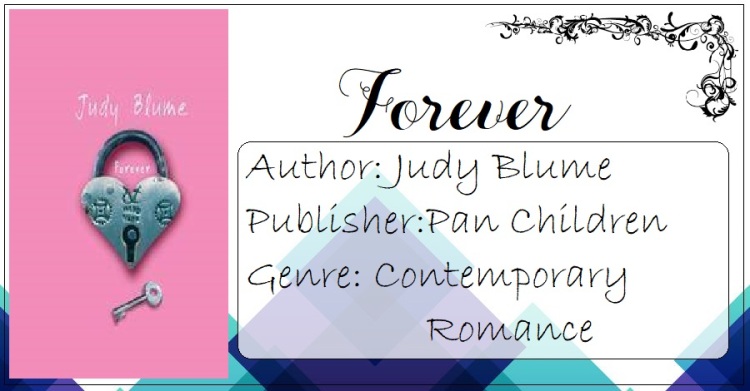 Katherine and Michael meet at a New Year’s Eve party. They’re attracted to each other, they grow to love each other. And once they’ve decided their love is forever, they make love.

It’s the beginning of an intense and exclusive relationship, with a future all planned. Until Katherine’s parents insist that she and Michael put their love to the test with a summer apart…

Forever is written for an older age group than Judy Blume’s other novels for children. It caused a storm of controversy when it was first published because of its explicit sexual content.

Katherine and Michael, two teenage souls who fall in love, only to discover that most of the times, love is clumsy and awkward. They share a wonderful chemistry, and I would totally vouch for them. But then life happens and so does growing up.

Katherine in insecure and she keeps having seconds thoughts about building a physical relationship with Michael. Michael, on the other hand, is trying really hard to win her trust. And thus begins an intense, exploratory relationship that is also about discovering one’s sexual side.

“Do you think you can wait – because I don’t want you to stop loving me. I keep remembering us and how it was. I don’t want to hurt you…not ever…”

Forever was banned because it talks about sex just the way it should be talked about, not sugarcoated and full of metaphors. It is most certainly explicit, but maybe the society does need to be straightforward about certain things, rather than overrating stuff.

The story is quite simple and predictable, with an emphasis on friendship and relationship. I wasn’t particularly fond of the writing style, It felt weak and shallow. The characters were pretty tolerable, given the circumstances.

Forever should be read because it tells us the perils of a teenage relationship and that even if you had to minus the other problems, facing one’s own sexual side can be quite a challenge.

To join or know more about The Banned Book Club hosted by the lovely Shruti @thisislit, click here