Two half-sisters, Effia and Esi, are born into different villages in eighteenth-century Ghana. Effia is married off to an Englishman and lives in comfort in the palatial rooms of Cape Coast Castle. Unbeknownst to Effia, her sister, Esi, is imprisoned beneath her in the castle’s dungeons, sold with thousands of others into the Gold Coast’s booming slave trade, and shipped off to America, where her children and grandchildren will be raised in slavery. One thread of Homegoing follows Effia’s descendants through centuries of warfare in Ghana, as the Fante and Asante nations wrestle with the slave trade and British colonization. The other thread follows Esi and her children into America. From the plantations of the South to the Civil War and the Great Migration, from the coal mines of Pratt City, Alabama, to the jazz clubs and dope houses of twentieth-century Harlem, right up through the present day, Homegoing makes history visceral, and captures, with singular and stunning immediacy, how the memory of captivity came to be inscribed in the soul of a nation.

Generation after generation, Yaa Gyasi’s magisterial first novel sets the fate of the individual against the obliterating movements of time, delivering unforgettable characters whose lives were shaped by historical forces beyond their control. Homegoing is a tremendous reading experience, not to be missed, by an astonishingly gifted young writer.

Homegoing by Yaa Gyasi has been recommended to me time and again. And this year I picked it up for #ReadingWomenChallenge under the prompt- A Multigenerational Family Saga. The story spans across 7 generations and has been narrated by 14 people (i.e 14 different POVs).

The story starts with two sisters- Effia and Esi, separated at birth and with a fate that is a polar opposite. As their generation continues we get a glimpse of the infamous slave trade and a glimpse of how the Africans tried to fight that.

The book then moves towards America and their belief in how a black man is guilty by default.

Homegoing explores a lot of themes and emotions, mainly hope and despair. The writing is quite gripping and I found myself invested in almost all the characters.

The one major issue I had with the book is to have not enough to read about a couple of people, whose lives inspired me. These characters were either killed without a second thought, or omitted during the further narration. 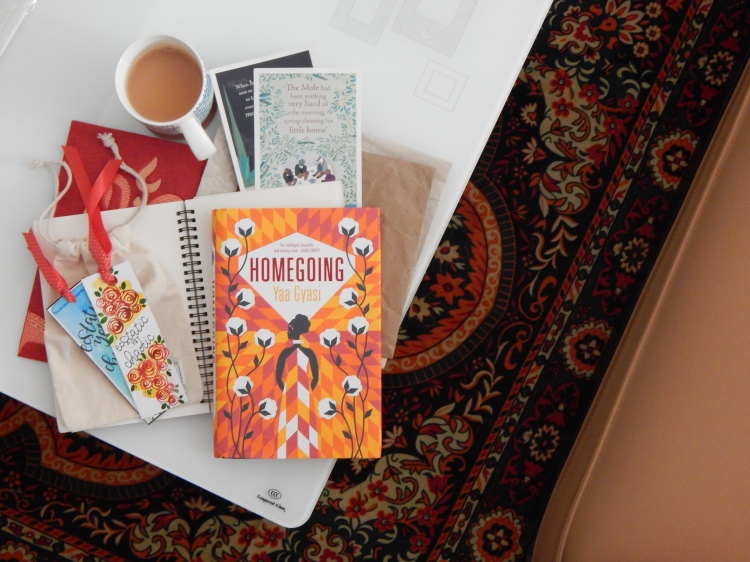 I loved the writing. Its engaging, fluid and powerful. There are instances where the plot gets super emotional and I felt sad and angry almost throughout the book. I don’t know if that’s the tone the author wanted to set, but that was the message I kept getting again and again.

Homegoing is about the Asantes and the Fantes (Africans) and the Britishers and the Americans, through the lives of a generation of a family that lived to see every possible atrocity that was put upon Black people and how they lived to tell the tale.

4 thoughts on “Book Review: Homegoing by Yaa Gyasi|A story that explores generations of tyranny and eventual survival but at a cost|”