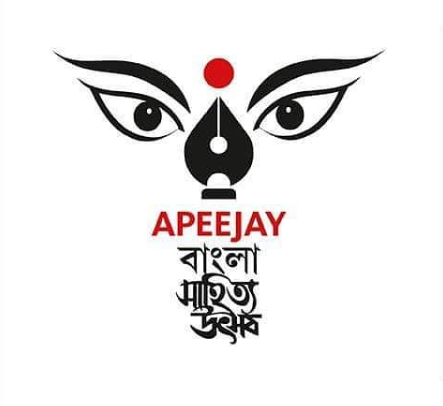 Bengali culture is known for its richness in the field of literature and we have given notable novelists to the world including Nobel Laureate Rabindranath Tagore.

The most prestigious Bengali Utsob (festival) in India, the Apeejay Bangla Sahitya Utsob celebrates the best of Bengali literature through a series of talks, discussions, and mesmerizing music. A celebration that is an educational experience in itself, the ABSU ‘promises to be grandiose, varied and a fitting tribute to the language of the city’.

The Apeejay Bangla Sahitya Utsob, 2018 was held at the Jorasanko Thakur Bari- the ancestral home of the Tagore family. The festival started on the 16th of November and was concluded on the 18th of November. The ABSU is presented in association with Patra Bharti and supported by Rabindra Bharati University.

“Apeejay Bangla Sahitya Utsob is in its 4th year and continues to support, promote & strengthen Bangla Language. This year our ever increasing audience will feel special, as the Utsob will be held at the birth place of Nobel Laureate Gurudev Rabindranath Tagore- Jorasanko Thakubari…….ABSU 2018 will be our best offering so far, with 20 specially curated sessions which range from heritage, partition, limericks, sports, music, cinema and audio of Bangla language in this pristine heritage venue invaluable to Bangla literary legacy and we hope people will (re)visit, appreciate and enjoy this Utsob we have put together……With consistent support from Patra Bharati, a valued association which is now in its 4th year, to accomplish this objective of expanding the reach of Bangla Literature through this pioneering initiative is truly inspiring”—Swagat Sengupta, CEO Oxford Bookstores & ABSU Director

Here are the highlights:

The keynote address was delivered by Mazharul Islam and mainly focused on the future of Bengali Literature. An enthralling light and sound show also accompanied the unveiling of the book cover of ‘Tero Nadir Pare’ by Sirsho Bandhopadhyay and a discussion on Terrorism in Bangla Literature titled ‘Sahitye Santrash’ between Sirsho Bandhopadhyay, Bitanu Chatterjee, Debotosh Das, Tridib Kumar Chattopadhyay, and Himabanta Bandhopadhyay. 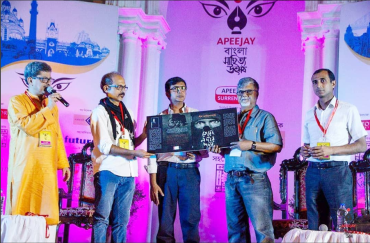 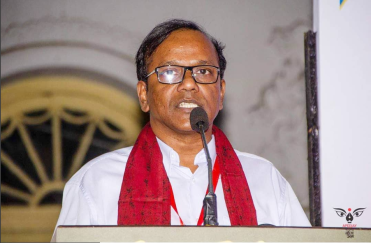 The day starts with Instrumental Music with Prof. Biswajit Bhattacharya on Tabla Lahara, Hiranmay Mitra on Harmonium, Pandit Debasish Bhattacharya on Sarod, and Pandit Parimal Chakraborty on the Tabla, from Rabindra Bharati University.

The other events from the day are as follows: 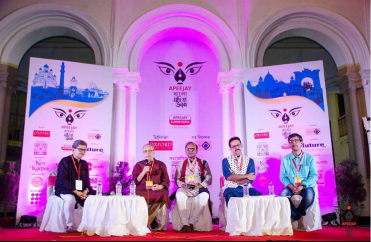 There are numerous discussions throughout the day which are both entertaining and intriguing. A few topics include Counter, Na Computer, Pathok Kothae Jaye Bar Bar? (Counter or Computer – Where will the reader go?), Porimori Kano Pori? (What we get from books by reading them), Where does Robithakur belong?); and Hare Hare Bujhilam, Sahitya Niye Boshilam! (Cinema cannot survive without literature). These discussions are meant to be engaging along with an encouragement of sorts to young minds who are interested in Bengali Literature.

The highlight of the Day: ABSU also introduced a unique discussion on how translation unites Literature beyond languages Duniyar Sahitya Ak Hou (How translation in literature is connecting the world literature together). Sotyer Modheo Sahitya (Reality is always hidden somewhere in literature) which focusses on how literature resides in everyday realities of life; London Kinba Mirike/ Golpo Ache Gaaner Lyric e (A story is hidden in the lyrics of the song), a discussion on Literature hidden in lyrics of songs; Porbo Na sunbo? Jor kise Gunbo? (Listening or reading books – which one do you prefer?) 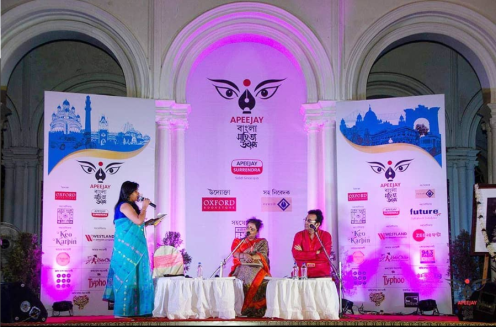 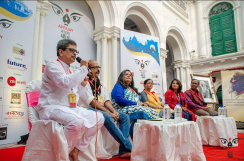 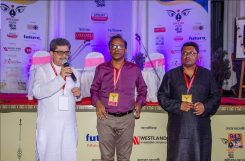 A huge Thank you to Apeejay Bangla Sahitya Utsob and their team for giving me a chance to attend and write about this glorious festival that was so rich and was indeed an educational experience.

Patra Bharati started its journey back in the year 1968, with the very reputed juvenile magazine, Kishore Bharati. In 1981 Patra Bharati entered the world of book publishing. It mainly concentrated on Children and Juvenile Literature. With the start of a millennium, Patra Bharati stepped up and started publishing of all Literature across all genres and age groups. The lines of restrictions were removed and a new age publication house that focused on varied forms of Literature was born. Patra Bharati has to its credit Novels, Essays, Compilations, Graphic Novels, Comics, Stories, Non Fiction, Prose and so on. Many titles have received Awards and Accolades and are best sellers in today’s time. Very recently Patra Bharati has also entered into English Publication, under the name BEE Books which has started gaining popularity with some of its titles.

Established in 1919, Oxford Bookstore is the best equipped ‘base-camp’ for journeys of the mind offering its customers the widest range of outstanding titles and consistently courteous and informed service for close to a century.  Today, with stores in major metros, India’s first of its kind tea boutique, Cha Bar, India’s only literary festival created by a bookstore, Apeejay Kolkata Literary Festival, Oxford Bookstore offers booklovers access to the very best in publishing enhanced by a variety of events which salute books, visual & performing arts and celebrate the word. Oxford Bookstore measures its success by the smiles on millions of happy customers that the brand has served over the last nearly 100 years. There are a few treats as sumptuous as a visit to Oxford Bookstore in India. Each time you walk into our iconic store in Kolkata where the brand started in 1919, its charm leaves you wanting for more. Our fleet of happy to help expert booksellers and informed hosts work day and night to bring to customers world class reading experience be it through our books or our fine teas and live by the brand’s motto – Much more than a bookstore – at every Bookstore.