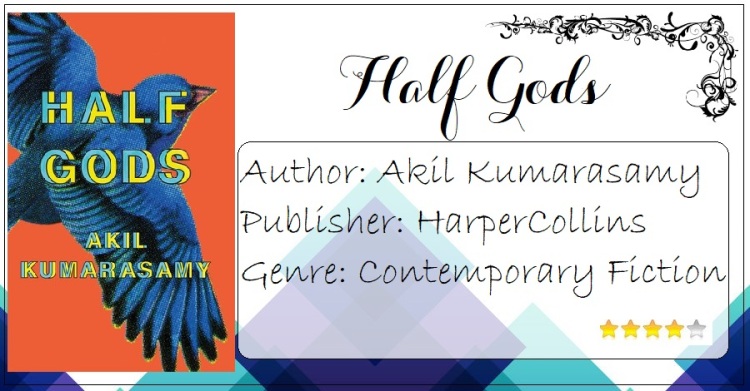 A startlingly beautiful debut, Half Gods brings together the exiled, the disappeared, the seekers. Following the fractured origins and destines of two brothers named after demigods from the ancient epic the Mahabharata, we meet a family struggling with the reverberations of the past in their lives. These ten interlinked stories redraw the map of our world in surprising ways: following an act of violence, a baby girl is renamed after a Hindu goddess but raised as a Muslim; a lonely butcher from Angola finds solace in a family of refugees in New Jersey; a gentle entomologist, in Sri Lanka, discovers unexpected reserves of courage while searching for his missing son.

By turns heartbreaking and fiercely inventive, Half Gods reveals with sharp clarity the ways that parents, children, and friends act as unknowing mirrors to each other, revealing in their all-too human weaknesses, hopes, and sorrows a connection to the divine.

This is a one of kind book and hence, I will not mention any characters in my review. The book reminds me of another book I read this year “The Nine-Chambered Heart” by Janice Pariat.

Half Gods is all about the lives of people who survived the freedom struggle in Sri Lanka forcing Tamilians to recede back to India and the subsequent declaration of Sinhalese as their National Language. The book has diverse characters, in terms of their fate. During the revolution, few chose to run away to Western countries and start a new life, but they have never felt at home. The longing for their birthland has always made them live a half content life.

The struggles of people who didn’t leave during the turmoil had a totally different experience, especially the ones who weren’t considered SriLankan citizens anymore. Losing family members during the fights was a constant, some were killed, others were kidnapped or disappeared overnight.

The trajectory of character growth throughout this series of interconnected short stories can only be described as random, chaotic and deeply unnerving. The plot follows a classic pattern of describing towns and cities with the help of the characters, their day to day activities, but mostly traumatizing memories.

The stories also talk about families who have a constant wedge among them, because of multiple reasons and experiences. They all seek the love, comfort, and affection of their home because everything is a mess, and its only people we can blame for all of it.

Half Gods is a book that everyone should pick up, even though the plot gets messy at times because of so many details and many more characters. This is a book that will mean something different to each and every reader but will win over your heart nevertheless.

** A huge thanks to HarperCollins for the review copy. All opinions are my own**

3 thoughts on “Book Review: Half Gods by Akil Kumarasamy|A book that leaves a distinct taste behind|”