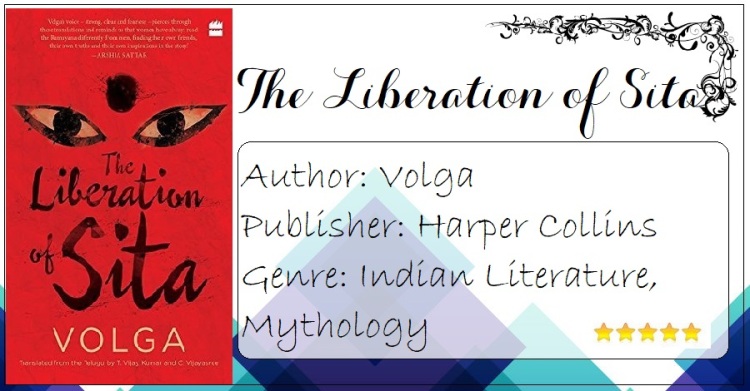 Valmiki’s Ramayana is the story of Rama’s exile and return to Ayodhya, a triumphant king who will always do right by his subjects.

In Volga’s retelling, it is Sita who, after being abandoned by Purushottam Rama, embarks on an arduous journey to self-realization. Along the way, she meets extraordinary women who have broken free from all that held them back: Husbands, sons and their notions of desire, beauty and chastity. The minor women characters of the epic as we know it – Surpanakha, Renuka, Urmila and Ahalya – steer Sita towards an unexpected resolution. Meanwhile, Rama too must reconsider and weigh out his roles as the king of Ayodhya and as a man deeply in love with his wife.

A powerful subversion of India’s most popular tale of morality, choice and sacrifice, The Liberation of Sita opens up new spaces within the old discourse, enabling women to review their lives and experiences afresh. This is Volga at her feminist best.

The Liberation of Sita takes us through the lives of 4 exceptional women in Hindu Mythology. These women have faced oppression from the society or their family for the crimes they never committed and were seen as mere casualties in a bigger operation/mission.

Some of the great men in Hindu Mythology have chosen the path of Dharma and made innumerable mistakes in the way. While these actions were for the greater good, women were seen to suffer the most.

“Whatever gives you peace of mind, consider that the truth.”

The Liberation of Sita is all about the lessons these remarkable, strong women learned through their journey and how they met Sita and tried to give her wisdom to not make those similar mistakes. But Liberation doesn’t come through wisdom. It comes through experience. As Sita is tormented again and again in the name of Dharma, she makes innumerable sacrifices and that’s how she realizes the meaning of the words told by these women.

“Did Ahalya know it would turn out like this? Rama has asked for my chastity test. Isn’t death better than this? Isn’t leaving me to my fate better? Why humiliate me like this? Why wage such a war if this is how I was going to be treated?
War is for demonstrating the valour of men. Rama has proved his heroism. He is awaiting the demonstration of his wife’s chastity. Isn’t this what Ahalya called distrust?
Wouldn’t accepting her in trust or rejecting her in distrust be better? What should be done now? Sita’s heart was like a volcano.”

The Liberation of Sita makes us believe that a woman is strong enough to protect herself, forgiving enough to forgive the gravest mistake by her loved ones, and kind enough to sacrifice her happiness for the greater good.

What I loved the most about the book is that the author has chosen to preach feminism without blaming the other sex. There is a chapter of Rama where we hear his ordeal and pain because of his separation from Sita. This states that the author wants us to understand feminism, but not as a competition with the other sex but as equals.