Romance is one of my favorite genre and just like you all, I keep cheesy romance at bay. But what I like is a complicated character, some pain, some yearnings and happy endings. So here are a few books with protagonists who will melt your heart.

The Wall of Winnipeg and Me by Mariana Zapata: Meet Aiden Graves. He is tall, brooding and certainly very handsome. And he is Football Player (imagine those toned muscles) His character is very layered. He talks less but is romantic at heart. Certainly doesn’t know how to express his feeling.

Vanessa Mazur knows she’s doing the right thing. She shouldn’t feel bad for quitting. Being an assistant/housekeeper/fairy godmother to the top defensive end in the National Football Organization was always supposed to be temporary. She has plans and none of them includes washing extra-large underwear longer than necessary.

But when Aiden Graves shows up at her door wanting her to come back, she’s beyond shocked.

For two years, the man known as The Wall of Winnipeg couldn’t find it in him to tell her good morning or congratulate her on her birthday. Now? He’s asking for the unthinkable.

What do you say to the man who is used to getting everything he wants?

Morrigan’s Cross by Nora Roberts: Are you a fan of Irish Romance? Well, here you get to meet Glenna and Hoyt, and their awkward yet adorable romance in the classic Irish setting. The story is more than Romance, but I think they make a great couple.

In the last days of high summer, with lightning striking blue in a black sky, the sorcerer stood on a high cliff overlooking the raging sea…

Belting out his grief into the storm, Hoyt Mac Cionaoith rails against the evil that has torn his twin brother from their family’s embrace. Her name is Lilith. Existing for over a thousand years, she has lured countless men to an immortal doom with her soul-stealing kiss. But now, this woman known as vampire will stop at nothing until she rules this world—and those beyond it…

Hoyt is no match for the dark siren. But his powers come from the goddess Morrigan, and it is through her that he will get his chance at vengeance. At Morrigan’s charge, he must gather five others to form a ring of power strong enough to overcome Lilith. A circle of six: himself, the witch, the warrior, the scholar, the one of many forms and the one he’s lost. And it is in this circle, hundreds of years in the future, where Hoyt will learn how strong his spirit—and his heart—have become…

Manwhore by Katy Evans: Malcolm Kyle Preston Logan Saint, or Saint. He is ambitious, knows what he wants and that includes girls. But what happens when he falls in love? Saint is a character who has the capacity to break your heart. The writing is exceptional and you will love him no matter what. He is like a cute, lost puppy (I don’t know if that comparison is appropriate :P)

Is it possible to expose Chicago’s hottest player—without getting played?

This is the story I’ve been waiting for all my life, and its name is Malcolm Kyle Preston Logan Saint. Don’t be fooled by that last name though. There’s nothing holy about the man except the hell his parties raise. The hottest entrepreneur Chicago has ever known, he’s a man’s man with too much money to spend and too many women vying for his attention.

Mysterious. Privileged. Legendary. His entire life he’s been surrounded by the press as they dig for tidbits to see if his fairytale life is for real or all mirrors and social media lies. Since he hit the scene, his secrets have been his and his alone to keep. And that’s where I come in.

Assigned to investigate Saint and reveal his elusive personality, I’m determined to make him the story that will change my career.

But I never imagined he would change my life. Bit by bit, I start to wonder if I’m the one discovering him…or if he’s uncovering me.

What happens when the man they call Saint, makes you want to sin?

Burn for You by J. T. Geissinger: Meet Bianca. A sassy, short-tempered chef who seems to be falling for the man she hates. I personally loved her dialogues. They made me laugh out loud at strange times.

The marriage is fake. But for a sassy chef and an arrogant billionaire, the sparks are real…

Jackson “The Beast” Boudreaux is rich, gorgeous, and unbelievably rude to the staff at Chef Bianca Hardwick’s New Orleans restaurant. Bianca would sooner douse herself in hot sauce than cook for Jackson again, but when he asks her to cater his fund-raiser, Bianca can’t refuse, knowing the cash will help pay her mother’s medical bills. Then Jackson makes another outrageous request: Marry me. The unconventional offer includes an enormous sum—money Bianca desperately needs, even if it does come with a contract—and a stunning ring.

The heir to a family bourbon dynasty, Jackson knows the rumors swirling around him. The truth is even darker. Still, he needs a wife to secure his inheritance, and free-spirited, sassy Bianca would play the part beautifully. Soon, though, their simple business deal evolves into an emotional intimacy he’s built walls to avoid.

As the passion heats up between them, Bianca and Jackson struggle to define which feelings are real and which are for show. Is falling for your fake fiancé the best happy ending…or a recipe for disaster?

The Song of Achilles by Madeline Miller: Patroclus and Achilles. Quite an extraordinary friendship that blooms into some intimate. Their chemistry is wonderful, even though they don’t express much. Their lives are dedicated to each other and that makes it all so beautiful.

Greece in the age of heroes. Patroclus, an awkward young prince, has been exiled to the court of King Peleus and his perfect son Achilles. By all rights their paths should never cross, but Achilles takes the shamed prince as his friend, and as they grow into young men skilled in the arts of war and medicine their bond blossoms into something deeper – despite the displeasure of Achilles’ mother Thetis, a cruel sea goddess. But then word comes that Helen of Sparta has been kidnapped. Torn between love and fear for his friend, Patroclus journeys with Achilles to Troy, little knowing that the years that follow will test everything they hold dear.

Profoundly moving and breathtakingly original, this rendering of the epic Trojan War is a dazzling feat of the imagination, a devastating love story, and an almighty battle between gods and kings, peace and glory, immortal fame and the human heart.

Simon Vs. the Homosapien Agenda by Becky Albertalli: I think the whole world has read this book or at least seen the movie. If not, what are you waiting for? Meet Simon and fall in love with him. Every time. Just go read it already.

Sixteen-year-old and not-so-openly gay Simon Spier prefers to save his drama for the school musical. But when an email falls into the wrong hands, his secret is at risk of being thrust into the spotlight. Now Simon is actually being blackmailed: if he doesn’t play wingman for class clown Martin, his sexual identity will become everyone’s business. Worse, the privacy of Blue, the pen name of the boy he’s been emailing, will be compromised.

With some messy dynamics emerging in his once tight-knit group of friends, and his email correspondence with Blue growing more flirtatious every day, Simon’s junior year has suddenly gotten all kinds of complicated. Now, change-averse Simon has to find a way to step out of his comfort zone before he’s pushed out—without alienating his friends, compromising himself, or fumbling a shot at happiness with the most confusing, adorable guy he’s never met. 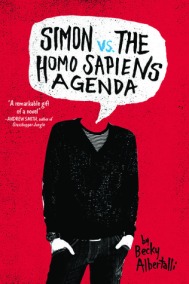 I have kept this post short. Do let me know if this was helpful and that you will look forward to more such genre related recommendations.