We are so excited to be bringing out the release of THE ROOTS OF US by Candace Knoebel. Fans of contemporary romance won’t want to miss this new emotional story. Be sure to grab your copy today!

About THE ROOTS OF US

The first time I saw Hudson Jameson, he was saving someone’s life.
The second time, he was ruining mine.

It was only supposed to be a vacation. A chance to let the Florida sun burn away the residue left behind from my failed relationships. I wasn’t searching for love. I was on a hiatus from men, especially ones with secrets.

Except Hudson had the gaze of a man drowning in his own miseries, and I was a sucker for the damaged souls. How could I deny him? How could I resist when his lips claimed mine?

I knew I couldn’t stay.
He told me he couldn’t bear to leave.

But some roots intertwine and refuse to let go, no matter how far you run.

Add THE ROOTS OF US to your Goodreads TBR here!

The Roots of Us is a bittersweet love story of Hudson and Hartley, that takes us through issues such as abandonment and sacrifice.

The first thing I loved about the story was that Hudson and Hartley are two totally opposite people. Hartly is loud and spontaneous, Hudson is calculative. While Hartly believes in running away from her problems, Hudson believes in facing his demons and solving the problems.

Hudson and Hartley find comfort in each other, but the comfort looks temporary, at least according to Hartley. Hartly is emotionally crammed, most of which is due to the fact that he father abandoned her and her mother for another woman. Hudson faces similar problems but he is full of guilt of letting his brother Silas go away.

They both try to fix each other, along with subtle encouragements to follow their dreams. As the story progresses, we see more of Hartley complicated thought process and her need to run from everything.

The start of the story is slow and gets better as it progresses. Though I am not happy with the decisions the characters make throughout the story, I totally respect the author’s representation of vulnerability. The characters are very simple and easy to follow. Most of them are predictable and each one has their own burden to carry.

Overall, a very adorable romance, with the beauty of Florida as the backdrop, The Roots of Us is about forgiveness and letting go, in order to have a better and happier life.

Grab your copy of THE ROOTS OF US today!

Read an excerpt from THE ROOTS OF US

Heightened voices rose from somewhere in the kitchen. I lifted my head when I heard a low, guttural growl. Assuming it was Hudson, I closed my laptop, curiosity picking at me once again. If there was a chance I could discover why Hudson had such a cloud hanging over his head, I had to take it.

I stood. Tip-toed forward, trying to peer through the serving window without being noticed.

“She won’t bite,” I heard the elderly woman say. “She’s just a woman, and it would do you some good to have no choice but to talk to someone. Especially someone of the opposite sex.”

She was giving him a run for his money. I already liked her.

“Martha—” Hudson said, his voice dipped in octaves that suggested she was nearing his limit for the day.

“Don’t Martha me,” she bit back at him. A lioness swatting at her cub. I inched forward, stopping just in front of the door as I tried to peek past the window to get a good look at the woman who reminded me so much of my Nona. “It’s been nearly a year since you rid yourself of that awful woman. It’s time for you to dip your feet back into the pool. You’re too young and good looking to be single. Now, get out there before she leaves.”

This was the part where my curiosity bit me in the ass. Or rather, shoved me on my ass.

With one, hard push, Hudson came barreling through the double doors, only, I was in the way. Trying to rush back to my table, I turned when the door caught the back of me.

I landed on my side, catching myself with my elbow as Hudson cursed behind me. When I turned, he was rubbing his forehead. I noted the bright red horizontal line across his forehead and the glaring look he threw over his shoulder, and put together that his forehead had collided with the frame due to his height. He grimaced when he noticed Martha shooing him forward with a brisk wave of her hands.

I was about to get to my feet when he turned back around and saw me on the ground. For a moment, he stood stone-still, eyebrows pressed together in a menacing furrow.

“I have a talent for being in the wrong place at the wrong time.” I laughed, but the sound was offbeat and kind of delirious as embarrassment painted my skin in bright shades of red.

“How did you—are you all right?” he asked as he offered a hand to help me up while holding a basket of bread. Gone was his rough demeanor, replaced by concern. Rocky and rough, yet serene and calm… Hudson. I liked the softness his features took when his guard was down. The round shape of worry circling the golden rings around his pupils.

I took his hand. Rough and marred with calluses. But that wasn’t what I noticed first. What I noticed first was how my skin seemed to ignite, like a tripwire set off, the sparks traveling through my veins until they filled my heart, bursting like fireworks.

I retracted. Insta-love wasn’t my thing.

“Yeah,” I managed as I brushed my hands against my shorts. I knew I shouldn’t have listened to that heady beating of my heart, but I had a weakness for men with rough edges and soft eyes and he was charging past the barricade I’d placed. I marked the acute details of his face. The faint lines in the corners of his eyes, probably from squinting in the sun too much.

And then there were those baby blues. Something familiar and slightly terrifying swimming inside them, sort of like staring at a white water rapid, wanting to dive in but knowing you’d be swept under in a heartbeat.

Nona had always said a man would come into my life one day and replace everything I thought I knew about love. He’d erase the hurt left behind from my dad. Teach me that not all men are monsters, and take every romantic cliché and multiply them by a thousand. The palms sweating, knees weak, skin tingling kind of clichés you read about.

I never believed her. Not until that moment. 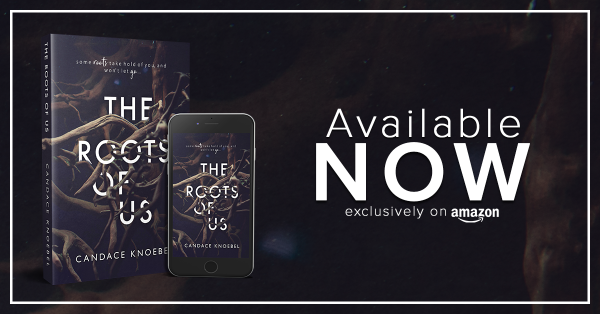 Candace Knoebel is a hopeless romantic with an affinity for whiskey and good music. Her love of words began when she met the boy who lived in the cupboard under the stairs. She’s a self-proclaimed Lost Girl. Words are her mirror.

With two completed series, her work ranges from paranormal to contemporary, all centered heavily around romance. Currently she lives in Florida with her husband and two children, and has just completed her thirteenth novel, The Taste of Her Words.

One thought on “Excerpt+e-ARC Review: The Roots of Us by Candace Knoebel”