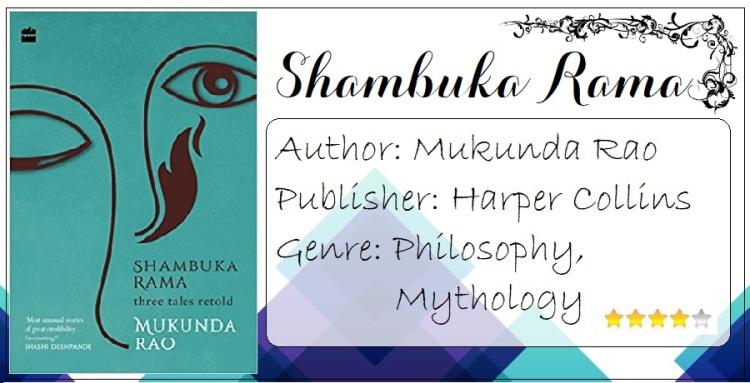 Rama, Lakshmana and Sita chance upon Valmiki’s ashram in the forest. But what is the shudra Shambuka doing there? As Duryodhana lies dying on the battlefield of Kurukshetra, he reflects on all that brought the world to this pass, his guilt and that of his enemies, his loyalties and those of his friends and allies. As the story flashes back and forth on the last moments of the Great War, dharma and adharma merge and blur. In the forest, during the exile of the Pandavas, Bhima, married to Hidimba, compelled by his love for his son, Ghatotkacha, decides to stay back. Even his mother’s anger and his elder brother’s command will not sway him … Mukunda Rao tells three classic stories from the epics, shedding new light on them, illuminating corners that we haven’t looked at before. Shambuka Rama: Three Tales Retold is a powerful blend of spiritual search, philosophy and mythology.

Shambuka Rama contains three tales- 2 from Mahabharata and 1 from Ramayana. The book gives a philosophical touch to these mythological tales and poses some basic and valid questions to its readers.

The first story is about Bheema, who has married Hidimbi and has a child Ghatothkach. But Bheema can’t live with them forever in the forest because of his ‘Dharma’ as the prince of Hastinapura. But is it ‘dharma’ to leave your wife and child in the forest, alone and to fend for themselves? Kunti is incomplete without her sons and hence, isn’t it unfair for her to ask Bheema to live without his son? While these might be tiny developments in a huge saga, these events are what shaped the characters, who are mere pawns in the “Mahabharata”

The second story talks about Duryodhana, lying half-dead near a lake and thinking about his decisions and ‘karma’. Pandavas are proud of their win and Krishna- the one loved by all is provoking them to destroy the Kuru clan. Each soul is in a dilemma and everyone wants revenge. But what does revenge bring with itself? Mass destruction. Loss of lives at a level that is unimaginable and unfathomable.

The final story has been taken from Ramayana and it a part of the first year of exile. Rama, Sita, and Laxmana come across Sudra Shambuka, who knows the religious texts by heart but was driven away from his own city- Ayodhya because he was born of a Shudra Womb. On the other hand, Rama has identity issues and he continues questioning himself and his life as a Prince. All of this makes a great tale about the understanding of “Brahmins” and the reason for their existence.

Shambuka Rama also gives you an overview of these epic events along with the standard thought of existential and identity crisis. Written in simple language, the text is capable of making you ponder over events that were once considered insignificant, but these same events shaped the personalities of there great Kshatriya warriors.

A mythology lover’s paradise, this book is all you need to understand the depts of mythology and that, it is more than a tale of good and bad.

**A huge thanks to Harper Collins for a copy of the book. All opinions are my own**