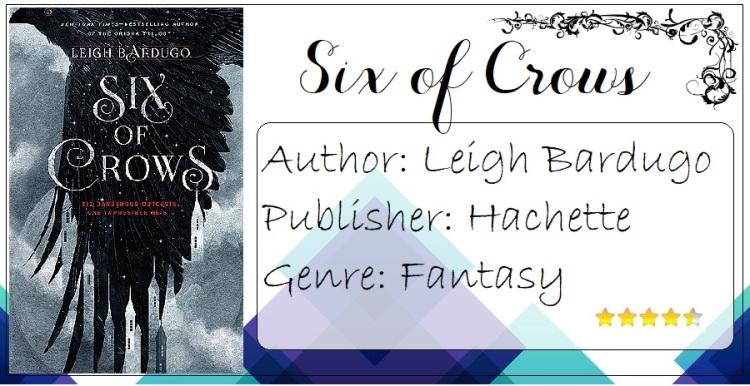 Ketterdam: a bustling hub of international trade where anything can be had for the right price–and no one knows that better than criminal prodigy Kaz Brekker. Kaz is offered a chance at a deadly heist that could make him rich beyond his wildest dreams. But he can’t pull it off alone…

A convict with a thirst for revenge.

A sharpshooter who can’t walk away from a wager.

A runaway with a privileged past.

A spy known as the Wraith.

A Heartrender using her magic to survive the slums.

A thief with a gift for unlikely escapes.

My first book of The Grisha Verse, and as much as I wanted to make myself familiar with the world, I was skeptical about not liking it at all. (hyped books does that to me :P)

50 pages in and I wanted to throw the book out of the window. But continuing it is one of the best decisions I have ever made. Six of Crows is a heist, epic and unimaginable. Kaz and his team of 5, are the most interesting lot of people.

The plot gets intense with every chapter. The narrator changes from chapter to chapter and the plot has been carefully and meticulously planned and executed.

“When everyone knows you’re a monster, you needn’t waste time doing every monstrous thing.”

Leigh Bardugo is definitely the queen of sass, and there’s never a dull moment. The dialogues are well placed and the humor is on point. This awesome escapade will carry you along with them, you like it or not. 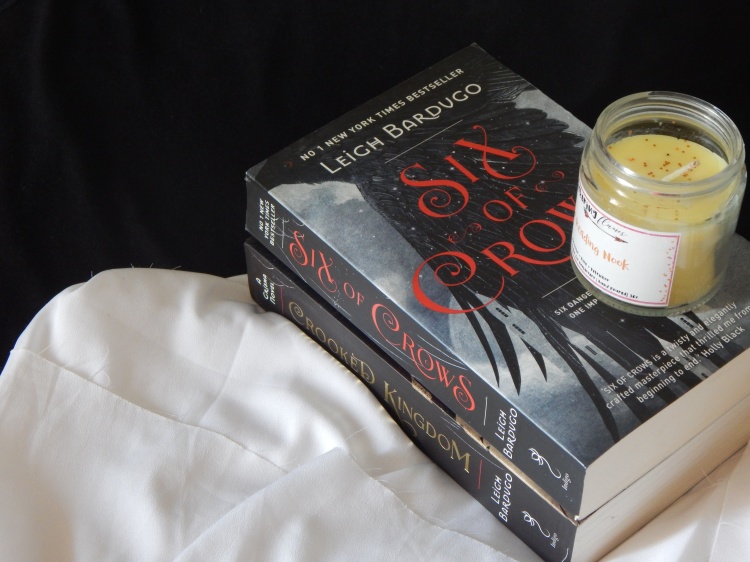 The theme of love has been more like a shadow, because mission comes first, and no one whats to lose the others. The book talks about past and secrets but they don’t overpower the main plot and are left to be explored later, which I believe happens in “Crooked Kingdom”. I am looking forward to Inej and Kaz. They definitely make a powerful couple.

“The heart is an arrow. It demands aim to land true.”

I have a lot of favorite moments in this book which are hilarious. But that would mean spoilers. And no one loves spoilers. This is definitely one of my favorite reads this year.

Six of Crows is for the adrenaline junkies and I am definitely one. It is full of failing plans, failing backup plans, a lot of action scenes and drama when you least expect it.

Have you read this one? I am sure you did 😛