When the Chief fell in Love 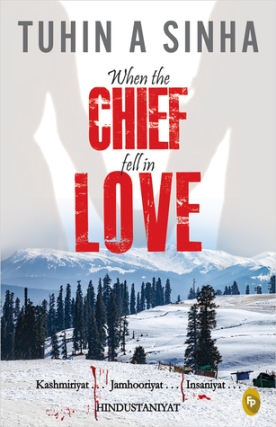 Vihaan Shastri, India’s young and dynamic Defence Minister, comes under attack when 20 soldiers are killed during a terrorist strike at an army camp in Kashmir.

With the whole country seething with rage and thirsting for revenge, and the government depending on him to resolve the crisis, Vihaan finds himself battling a strange distraction: Zaira Bhat, the only woman he has truly loved, is back in his life, after 12 long years. In a chequered relationship which began with a love affair in 1990, and which had the two love and lose each other twice at different stages of life, Vihaan and Zaira now find themselves in an extraordinary situation.

While Vihaan is the defence minister of the country, Zaira is the daughter of Kashmir’s leading, and most wanted, pro-Pakistan separatist leader, Bilal Mohammad Bhat. Is Vihaan capable of pulling off a double coup? Can he win back the love of his life and also save an on-the edge Kashmir? Come, be a part of Vihaan and Zaira’s crazy journey as they make their way through learning what it is to love someone eternally . . .

Do you believe in soulmates? Or, in the concept that people meant to together always end up together? If yes, this might be a book you find interesting.

Vihaan, the defense minister of India, receives an invitation for a book launch, a book written by her ex-girlfriend Zaira. In midst of security threat at the border near Kashmir, our young minister is thrown into a confusion so as to attend the book launch or not. As Vihaan tries to find an answer, we are given a back story about Vihaan and Zaira, starting from how they met to how they fell in love and ended up going separate ways, only to meet again and again.

But having a fling for the separatist’s daughter isn’t an easy job. As Vihaan faces the toll his decisions might take, he finds himself closer to finding the reason for his existence and his sense of duty takes him to Kashmir and solve crisis like never before. This story is all about love- for a person and the country. It takes a special kind of courage to pursue one’s desire in spite of all the problems and hurdles.

I had my issues with a few things, first being, the story starts with a very casual tone. We see Vihaan as a guy head over heels for Zaira, and we have absolutely no idea about his beliefs or political views. But towards the end the tone gets serious and we see a different Vihaan- one who would do anything for his country. This is definitely a surprise element, but I am left unsettled with the way the story ends. The plot was repetitive at places, especially Vihaan and Zaira crossing paths about a Zillion times. That could have been replaced by how Vihaan rose to power and what his ideologies were. Somehow, I found the plot unbalanced and weak.

I am happy with Zaira character because she has been kept constant throughout- a woman who is spontaneous, sensitive and has absolutely no clue about her whereabouts. This book can indeed be turned into a movie because it has drama, a sense of longing, romance and a political agenda, but as a book, it could have been better.

One thought on “Book Review: When the Chief fell in Love by Tuhin A. Sinha”