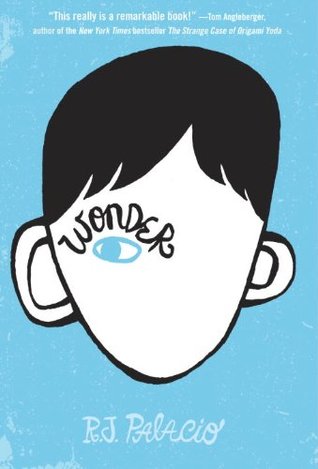 I won’t describe what I look like. Whatever you’re thinking, it’s probably worse.

August Pullman was born with a facial difference that, up until now, has prevented him from going to a mainstream school. Starting 5th grade at Beecher Prep, he wants nothing more than to be treated as an ordinary kid—but his new classmates can’t get past Auggie’s extraordinary face. WONDER, now a #1 New York Times bestseller and included on the Texas Bluebonnet Award master list, begins from Auggie’s point of view, but soon switches to include his classmates, his sister, her boyfriend, and others. These perspectives converge in a portrait of one community’s struggle with empathy, compassion, and acceptance.

A book about a child with a condition, rarer than rarity. But that doesn’t make his life easy because he has been called a ‘freak’, a zombie, an alien and every other ugly looking character in the history of mankind.

But that doesn’t break his heart at all. Meet August Pullman, a kid you will instantly fall in love with, a kid full of optimism. August, or Auggie, as people love to call him knows about his condition, the way he looks and the way, the world sometimes aligns themselves when he enters the room. But he is kind and smart, and strong. He has been through a lot, physically and emotionally. But he doesn’t let that break him. Auggie is loved by all, well, not initially, but eventually, the world is at his feet.

When Mr. and Mrs. Pullman decide to put Auggie to a private school, (after years of homeschooling), Auggie finds it difficult to resonate with the kids his age. He is bullied, talked about, hated and betrayed. But he continues to shine brightly.

The book is written in very simple sentences, which makes it a very honest and an emotionally difficult book. No metaphors, a book where Red is Red. That is the beauty of this book. The book not only captured Auggie’s side of the story, but it also tells us how his existence affects the people around him. Different people, different versions.

The book captures a multitude of emotions. Empathy, sympathy, pain, compassion, and kindness. The whole plot revolves around these emotions and shows us the importance of each of them and how it shapes people and makes them a better person.

“Kinder than is necessary. Because it’s not enough to be kind. One should be kinder than needed.”

I am in awe of the ending. As a reader, the protagonist is like a fellow mate, and I am so proud to have gotten a glimpse of Auggie, a beautiful, kind-hearted and smart as hell boy. I am glad I read this book. It’s heartwarming, and it has filled me with a strong sense of love for the protagonist.